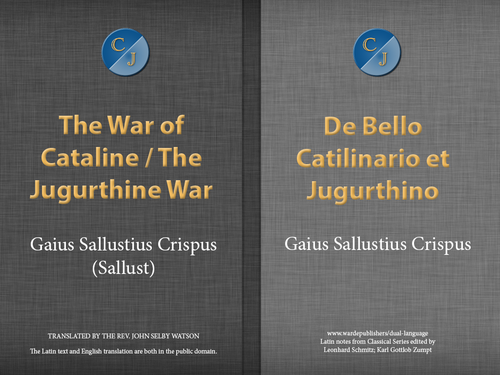 The War of Cataline / The Jugurthine War

1. Bellum Catilinae (War of Catiline), also called De coniuratione Catilinae (Conspiracy of Catiline), is the first history published by the Roman historian Sallust. The second historical monograph in Latin literature, it chronicles the attempted overthrow of the government by the aristocrat Catiline in 63 BC in what has been usually called the Catilinarian conspiracy.

2. Bellum Catilinae was probably written during the last half of the 1st century BC. After writing it, Sallust went on to author Bellum Iugurthinum, a historical account of the Jugurthine War.

Translation Information: Both titles appeared in a number of English Translations. This dual-language title is based on English translations by John Sheby Watson that appeared in a compliled volume prepared by Harper's classics library in 1899.

Both the original Latin and the English Translation are in the public domain.